Skip to content
Home>Twin Cities>“The Girls in the Band” — New Screening, Concert at TPT on March 22

They wiggled, they jiggled, they wore low cut gowns and short shorts, they kowtowed to the club owners and smiled at the customers… and they did it all, just to play the music they loved. –Girls in the Band trailer 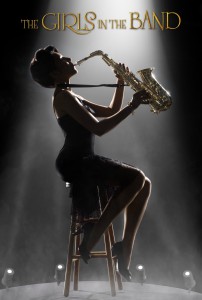 The award-winning documentary film The Girls in the Band returns to the Twin Cities for a special screening and concert on March 22 (6:30 pm) at the newly remodeled TPT studios in St. Paul’s Lowertown. The film, which will air on TPT at 8 pm on March 25, was a big hit of the 2012 Minneapolis-St Paul International Film Festival and returned a year later for a special week-long screening at the St. Anthony Main Theater. In addition to the film, this evening includes a concert presented by Pippi Ardennia and the “Women of Jazz” band, a small ensemble of veteran and student musicians. Jazz 88 (KBEM) co-hosts this event.

The Girls in the Band
The Girls in the Band explores the untold stories of female jazz and big-band instrumentalists, beginning in the 1930s when these women had to endure numerous hardships while facing limited opportunities. The film reveals the ways in which these women, faced with sexism and racism, persevered in sharing their extraordinary talents in performances across the country. Excluded from all-male bands, some women formed their own, enormously successful outfits like the International Sweethearts of Rhythm and the Melodears.  The film continues into the present day and reveals the fundamental place that women have carved for themselves in jazz culture. Film Editor Edward Osei-Gyimah arranges many of the film’s vintage black-and-white performance clips into witty illustrations of the musician’s anecdotes. Among the women featured in the film are trombonist Melba Liston, ‘trumpetiste” Clora Bryant, Roz Cron and the International Sweethearts of Rhythm, pianist/radio host Marian McPartland, and contemporary drummer Cindy Blackman Santana.

Judy Chaikin, a graduate of AFI’s Directing Workshop for Women, is best known for writing, producing and directing the Emmy-nominated PBS documentary, Legacy of the Hollywood Blacklist. In 2004 she received her second Emmy nomination for the documentary, Building on a Dream, and directed and co-wrote the short romantic-comedy film, Cotillion ’65, which has appeared in 40 film festivals, winning Best Short, Best Comedy, Best Director and Audience Choice Awards. In 1996 Ms. Chaikin won the Blue Ribbon at the American Educational Film and TV Festival for the docu-drama, Sojourner Truth: Ain’t I a Woman?, featuring Julie Harris.

Tickets ($20) for the screening event are limited! Reserve through Eventbrite here.

TPT is located at 172 East 4th Street, St. Paul. If you can not attend the screening, watch the broadcast of The Girls in the Band on TPT Channel 2 at 8 pm on March 25.