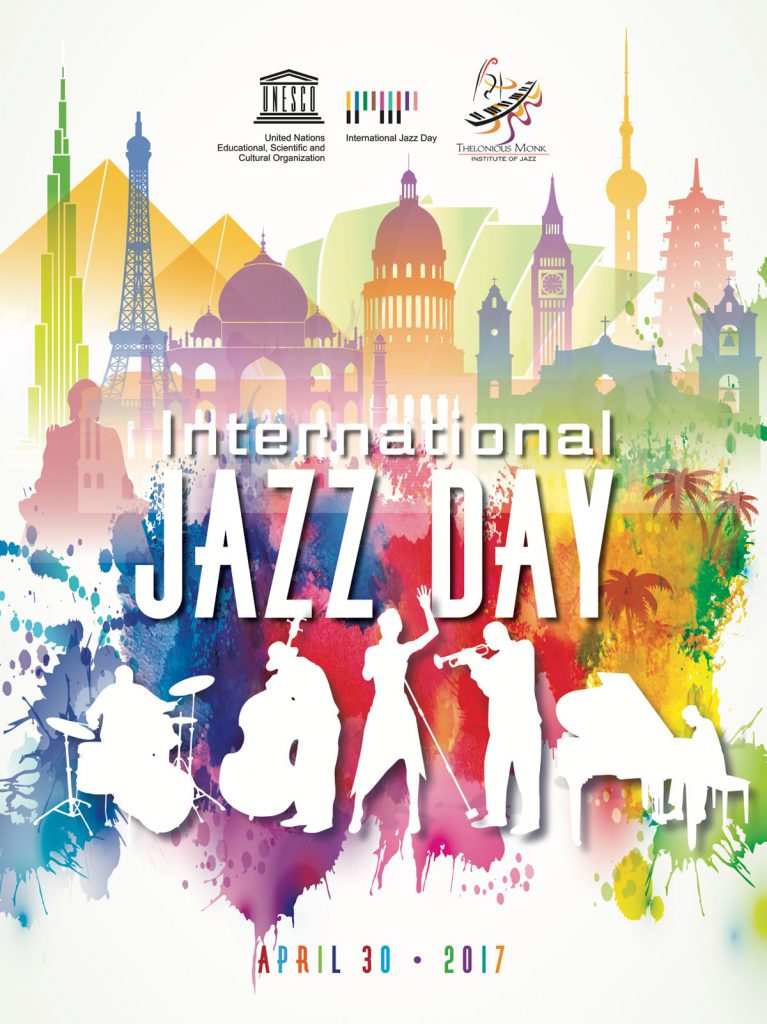 The sixth annual International Jazz Day will be celebrated worldwide on April 30, 2017. The musically vibrant and culturally rich city of Havana, Cuba, has been selected to serve as the 2017 Global Host City, and will present the All-Star Global Concert at the Gran Teatro de La Habana Alicia Alonso under the auspices of the Ministry of Culture of Cuba, the Cuban Institute of Music, and the Cuban National Commission for UNESCO. The concert will be live streamed on JazzDay.com (April 30, 8 pm CDT), and will feature an extraordinary array of artists from around the world paying tribute to the international art form of jazz.

In partnership with the Thelonious Monk Institute of Jazz, International Jazz Day highlights the power of jazz as a force for freedom and creativity, promotes intercultural dialogue through respect and understanding, and unites people from all corners of the globe. The day is recognized on the official calendars of both UNESCO and the United Nations. International Jazz Day programs are made possible by Toyota, the 2017 lead partner.

“UNESCO is proud to be associated once again with the Thelonious Monk Institute of Jazz, as well as with the Instituto Cubano de la Música to raise the flag for jazz, for freedom, for creativity, for diversity and for unity,” said Irina Bokova, Director-General of UNESCO. “This year’s focus on Cuba is testament to the power of jazz to build bridges and join women and men together around shared values and aspirations.”

Many acclaimed musicians and educators from Cuba and around the world will participate in free jazz performances, master classes, improvisational workshops, jam sessions, and community outreach initiatives. Programs will take place at schools, arts venues, community centers, jazz clubs, and parks across the city of Havana and throughout Cuba during the week leading up to the festivities on April 30th. Additionally, jazz history and education programs will be provided for tens of thousands of students in over 11,000 schools across Cuba. These programs will be among the thousands of International Jazz Day live performances, educational activities, and community service programs taking place in more than 190 countries on all continents.

Herbie Hancock, UNESCO Goodwill Ambassador for Intercultural Dialogue, said, “Afro-Cuban jazz and its rich history have played a pivotal role in the evolution and enrichment of the entire jazz genre. The incomparable trumpeter Dizzy Gillespie along with beloved Cuban musicians Mario Bauzá, Machito and Chano Pozo, infused American jazz with Afro-Cuban rhythms to create a brand new, energetic sound that defined modern music. We are so pleased that Havana, Cuba, will serve as the Global Host City for International Jazz Day 2017. On behalf of the worldwide family of jazz musicians, educators and enthusiasts, I would like to thank the citizens of Havana and Cuba for their enormous support of this truly global musical art form.”

The Thelonious Monk Institute of Jazz is once again working with UNESCO and its field offices, national commissions, networks, associated schools, universities and institutes, public radio and public television stations, and NGOs to ensure their involvement and participation in International Jazz Day 2017. Additionally, in countries throughout the world, libraries, schools, universities, performing arts venues, community centers, artists, and arts organizations of all disciplines will be celebrating the day through presentations, concerts, and other jazz-focused programs.

The celebration in Havana of the International Jazz Day in 2017 marks the seventieth anniversary of Cuba’s accession to UNESCO and the foundation of the National Commission for UNESCO.

For more information about International Jazz Day and to live-stream the concert, please visit www.jazzday.com.