This year we have a treasure trove of previously unreleased live recordings by some of the giants of jazz from the 60’s and 70’s including Ahmad Jamal, Charles Mingus, Elvin Jones, and Mal Waldron. This is the first of four reviews of those releases.

Ahmad Jamal influenced many players with his lyrical approach to jazz piano. An earlier live recording, his1958 landmark album Ahmad Jamal at the Pershing put him on the map. He was a huge influence on Keith Jarrett who said in an NEA interview that his musical directions changed when he heard Jamal:  “I found the ‘white album’of Ahmad Jamal’s [Portfolio of Ahmad Jamal]  and put that on.  I heard Ahmad’s trio and I heard the space in it. There’s three guys playing, but they’re leaving spaces. And there’s phrasing that was contagious. And I would say that was a defining moment”. In the liner notes Kenny Barron says, “He leaves a lot of space for the rhythm section. And one of the things that’s nice is sometimes he’ll play an idea, and in the next course you expect him to play it again, except maybe he won’t, and the rhythm section plays. So he leaves all of this space for the rhythm section to either finish an idea or complete it. And it’s really nice. It’s like he kind of orchestrates the piano, kind of orchestrates everything. It’s just so beautiful to hear”.

Ahmad Jamal not only influenced pianists. Miles Davis in his autobiography said “He knocked me out with his concept of space, his lightness of touch, his understatement and the way he phrased notes and chords and passages….I loved his lyricism on piano, the way he played and the spacing he used in the ensemble voicing of his groups.”. Miles also said that he chose Red Garland for his quintet because he wanted a sound like Jamal’s. 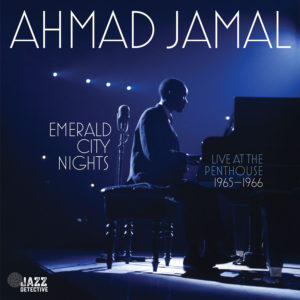 On Emerald City Nights: Live at the Penthouse you can hear Jamal’s lyricism and use of space that Davis, Jarret, and Barron spoke of performed in that intimate Seattle club. These club dates were recorded by local radio host and live broadcast engineer Jim Wilke and the quality is excellent. On these recordings Jamal’s trios included bassists Richard Evans and Jamil Nasser, and drummer Chuck Lampkin on the 1963-64 shows; and features Nasser with drummers Lampkin, Vernel Fournier, and Frank Gant on the 1965-66 dates. The sets feature the trios on standards and only two Jamal originals: “MInor Mood” on Volume 1 and “Concern” on Volume 2.

Supervised by Ahmad Jamal himself, the vinyl albums are issued on 180-gram discs transferred from the original tapes. Albums include extensive booklets with new reflections by Jamal about his work. The 1963-64 volume includes new interviews with the late Ramsey Lewis, and Hiromi who was mentored by Jamal, while the 1965-66 collection contains interviews with pianists Jon Batiste, Kenny Barron, and Aaron Diehl.